Hello, my name is Colin Frank and I have recently completed my doctorate in music composition and performance at the University of Huddersfield. Since July 2021, I have worked as a Digitisation Assistant at Heritage Quay for the Centre for Research in New Music (CeReNeM). Over the past year I digitised programmes and journals in the archives at Heritage Quay including the British Music Collection (BMC), Huddersfield Contemporary Music Festival (HCMF), and Society for the Promotion of New Music (SPNM), which are now publicly available to browse online at the Divergence Press website.

As my job has entailed scanning and creating metadata for items in these collections, I’ve been able to leaf through concert programmes and composer magazines from 1942 up until the present. Even though I specialise in contemporary music, I never knew the extent to which these organisations were active in Britain over the 20th and into the 21st centuries until I dug into these collections. It was incredible to see the amount of new works created and performed in Huddersfield and across the UK, both by composers and ensembles I recognised and those not in the history books. On occasion I would find a professor of mine pictured when they were younger and styling long flowing hair, or I would recognise a composer from my home country, Canada, appearing in a Huddersfield concert. The international esteem of the Huddersfield Contemporary Music Festival is certainly evident in this collection, with the likes of John Cage, Pierre Boulez, Karlheinz Stockhausen, Steve Reich, Gyorgy Ligeti, Robert Ashley and other famous modernist and experimental composers having visited the town. I wonder if Cage foraged for wild mushrooms in woods I’ve walked in, or if Yannis Xenakis was impressed by architecture of the Queensgate Market Hall—a building that relates in design to his own designs and compositions.

Probably my favourite find that stood out historically was in the SPNM’s archive. In digitising programmes of the organisation, which started during the second World War, I came across a studio recital scheduled for May 8th, 1945. Written in pencil across the top is ‘Cancelled – VE day’. Clearly the musicians and audience were on the streets celebrating. I’m impressed to think that the SPNM started a series of new music in a bombed-out London, and it reminds me of the value of making art rather than war. 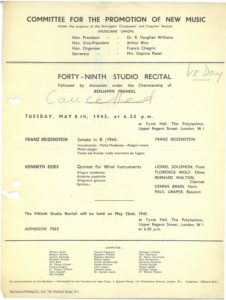 The materials that are now available online include the ‘Composer’ magazine that was published from 1958 – 1987; HCMF’s programmes and booklets since 1978; and SPNM’s journal, New Notes, that ran from 1990 – 2009. All these materials are also available to view at Heritage Quay.