There is a jagua 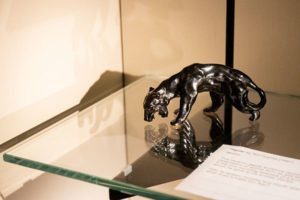 r prowling in one of the display cases at Heritage Quay. Although only 15cm long, with its taut muscles and mouth open in a roar it demands attention. Made by one-time Poet Laureate Ted Hughes (1930-1998) it is clearly the result of close observation of the natural world, and important as the only known surviving example of sculpture by the poet.

This is only one of many objects now on display as part of Heritage Quay’s latest exhibition,

Bringing together pens and paper samples, books and badger bristles, photographs and feathers, the exhibition celebrates one of Heritage Quay’s most important recent acquisitions. The collection was formed by Mark Hinchliffe, a poet and friend of Ted Hughes.

The exhibition includes first edition, fine press and limited edition published works, many of which have been signed by Hughes. There are photographs of Hughes and his family, some previously unrecorded, and correspondence between Hughes and Hinchliffe. Not limited to paper objects, there are tools relating to the family-run Morrigu Press, sherry from Hughes’ time as Laureate, and even one of Hughes’ Mont Blanc pens.

As well as offering unique material relating to the life of one of the twentieth century’s major poets, the exhibition also shows us something of how Hinchliffe engaged with Hughes’ work. Through his annotations, or the newspaper clippings, plant and animal matter, postcards, letters and programmes tucked into the books, we see a dedicated reader in action. 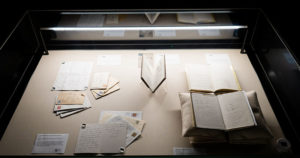