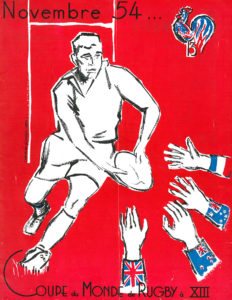 In 1954, the first ever Rugby League World Cup was treated with consternation by most British fans. The GB team wasn’t expected to do well, and people weren’t really sure why it was taking place. Extraordinarily, the team came together, captained in style by Dave Valentine, and won the tournament.

Fast forward to 2022, and the staging of the 2021 Rugby League World Cup: we see something very different. The tournament is big and high-profile. Men’s, Women’s and Wheelchair games will all be broadcast live. All players will receive equal participation fees. The tournament which started with only four nations has expanded to include 20. Heritage Quay’s new exhibition, The Story of the Rugby League World Cup, tells the story of how this happened.

We are extremely proud to look after the national Rugby Football League archive here at Heritage Quay. This autumn’s tournament has allowed us to explore the collection in a new light, focusing the experiences of those playing in, organising and watching Rugby League World Cups. Many items are on display for the first time, and highlight teams and players from the Men’s, Women’s and Wheelchair games. A programme and scarf from Papua New Guinea’s first World Cup appearance in 1987 tells a story both about the rise of Pacific nations in global Rugby League and about the place of League as PNG’s national sport. A runner’s up medal from the 2000 Women’s World Cup is shown alongside a fundraising event ticket 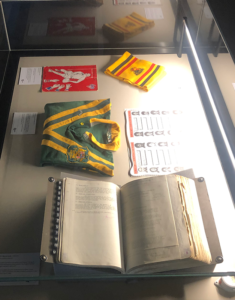 . This speaks to the extraordinary dedication, as well as sporting skill, of the Great Britain Women’s team, who had to fund their own participation in international tournaments. A Great Britain Wheelchair Rugby League t-shirt shows how the Wheelchair game has exploded onto the international stage since its development in 2004. 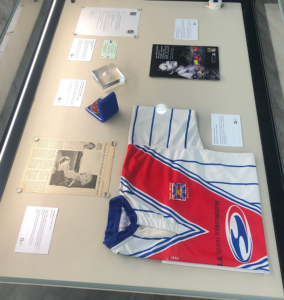 You can learn about some extraordinary people, too: Clive Sullivan, the first Black person to captain any Great Britain sporting team, who led GB to World Cup victory in 1972; Jackie Sheldon, former Head Coach of the GB Women, whose passion and talent has done so much for the Women’s game; Martin Norris, who captained Great Britain’s Wheelchair team in the inaugural Wheelchair World Cup in 2008, and has gone on to be an important advocate for the sport.

Whether you are a die-hard Rugby League fan, or you want to find out more about the tournament, come and visit Heritage Quay for The Story of the Rugby League World Cup.