Skip to content
Posted on November 27, 2013 by Sarah Wickham

The acquisition of the Robert Blatchford Collection by the University Archives and Special Collections service demonstrates an on-going commitment to building political resources of both local and international significance at the University of Huddersfield.  Robert Peel Glanville Blatchford (1851-1943) grew up in Halifax, and was a soldier, patriot, author and journalist who founded the weekly socialist newspaper The Clarion in 1891.  Blatchford’s political beliefs created tensions within the International Labour Party, and his views on subjects including education, religion and war continued to be controversial throughout his life, even to his supporters, and may have influenced the unstable readership history of the Clarion throughout the early twentieth century.  More than just a newspaper, it generated a dynamic ‘Clarion Movement’, through which socialist Britons formed social clubs embracing activities from cycling to Scouts, some of which have endured to the present day.  An activist driven by his own beliefs, rather than bound by organisational loyalties, in the 1920s Blatchford became disillusioned with labour and eventually voted Conservative. Defiantly atheist, after a number of personal tragedies he turned to Spiritualism.  He was also a steadfast patriot, and his love for his country is reflected throughout his work.

The archive relates to Blatchford’s professional and personal life, and includes a long, affectionate and witty correspondence with his two daughters about the personal and political issues of the day, and correspondence received by the sisters upon his death in 1943.  It also contains copies of his books and publications, and a large number of articles written by or about him on his beliefs, from Socialism to Spiritualism and the impending threat from Germany during the 1930s.  The collection comes to the university following the recent success of the second annual JH Whitley lecture in political history, and joins a core of important political archives reflecting the work of local MPs and the history of the Labour party and socialist politics in nineteenth and twentieth century West Yorkshire.

The collection was deposited by Lord David Clark, Baron Clark of Windermere, a former MP for the Colne Valley and previously a Senior Lecturer in Politics for the University of Huddersfield.  Once catalogued, the collection will be available for consultation from Summer 2014 by appointment with the university archives. 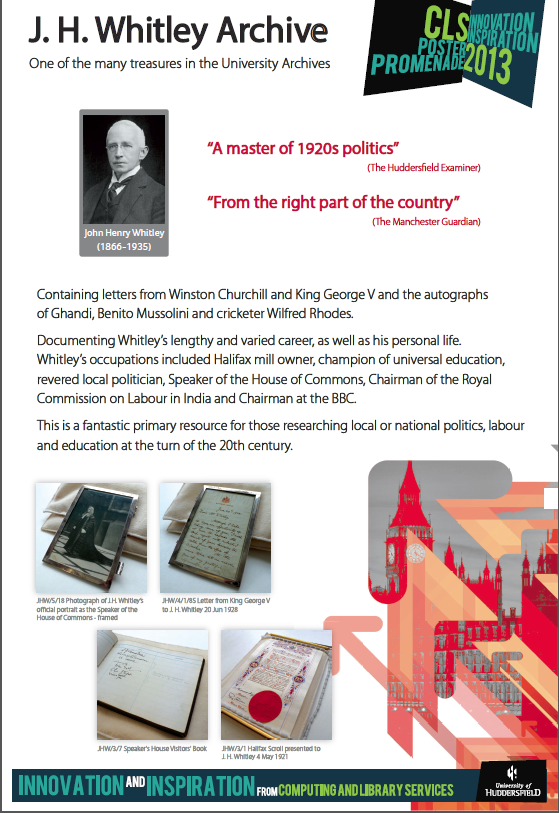 Background to the collections

The collections reflect major social, cultural and political movements of national and international significance, which have a common thread in relating to Huddersfield and the region as a key location for associated activity.

A wide range of formats are covered, including files and individual sheets, textile samples in bound volumes, large formats including maps, plans, drawings, posters, magnetic video and audio cassettes, photographic formats of a wide range of types and dates, many of them plastic based (acetate and nitrate), long playing records and digital material both sound and image.

The vast majority of the collections date from the mid-19th century to the modern day, although there are a few items dating back to the 18th century and one or two items even earlier.

West Yorkshire has had a long reputation for radical politics. These collections help inform that reputation. They were collected because the University of Huddersfield and its predecessor have a national reputation as a centre for the study of Labour history. Indeed, the Huddersfield Labour Party records were purchased by the Polytechnic in the 1960s well in advance of the establishment of a formal archive service.  This displays the long-term aspiration of the Polytechnic to develop this area of specialism and the recognition by the Polytechnic of the value of these records.

There are the records for the Labour parties of Colne Valley, Denby Dale and Huddersfield. The Colne Valley Constituency collection is particularly interesting as it was the first constituency –based Labour Party in Britain and includes all its meeting records since its creation in 1891.  The Colne Valley Labour Party Collection provides a detailed and coherent record of the operation and experience of a local political party organisation.  It covers the work of the local Labour Party including its very active Women’s Section and includes minutes, correspondence and accounts plus the records of individual Labour clubs across the region. It also holds records on the campaign elections of individual candidates such as Tom Mann, who was a founder of the Independent Labour Party and a militant Socialist, and Victor Grayson, another radical socialist whose mysterious disappearance in 1920 was widely believed to have been the result of his intention to reveal evidence of Lloyd George’s sales of honours.

There is a similarly detailed range of records for the Huddersfield Labour Party, which is equally interesting.  This collection demonstrates the widespread interests and work of constituency MPs and their close connections with community life as well as the operations of a local political party.

These Labour Party collections are supplemented by collections relating to several MPs.  The most notable are the papers of JH Whitley who was Speaker of the House of Commons in the 1920s (including during the General Strike) and became Chairman of the BBC (1930-935).

There are also the records of Mick Clapham (Barnsley West MP from 1992 to 2010), who opposed many of Tony Blair’s measures and resigned over cutting of benefits to lone parents. This collection covers his constituency work e.g. reports, correspondence.  Another collection details the work of J P W Mallalieu, Huddersfield’s longest serving MP (1945-79).

These Archive collections are strongly supported by a variety of special collections. For example the library of Arthur Gardiner who was a conscientious objector during the First World War (when Huddersfield was a major centre for the anti-war movement) and a Huddersfield Councillor in later life. The collection covers local history, general history, books and pamphlets covering politics, history and social history. The items date from the late C19th through to mid C20th. It is the Library of a self-made man in the Huddersfield tradition. The library of Dr Wilson includes many volumes relating to left wing ideas, and the Left Book Club collection includes many ‘classic’ left wing texts. The major George Henry Wood collection includes works on politics of all sorts.

There is a good collection of C20th newspapers particularly from the Labour and Socialist movements which supplement newspapers held in the Colne Valley and Huddersfield Labour party Archives. There are also the left wing publications of the Wilson collection and the Conservative Party ephemera found in the Whittaker collection.

To find out more about any of our collections, please contact us.