Whilst Schaeffer, Stockhausen and their respective colleagues at the Groupe de Recherches Musicales (GRM) and Westdeutscher Rundfunk (WDR) studios propagated concert electronic music and produced significant theoretical texts on their work and the new medium, Gerhard was a more practical composer. Gerhard’s experiments were carried out in the public glare initially through composing incidental music such as The Prisoner (1954), King Lear (1955) and Pericles (1958), and his thinking explained in radio talks such as Audiomobiles for the BBC Third Programme (1960).

One of the disadvantages of not working permanently in a major radio or state-funded studio meant that there was no archival administrative structure to preserve Gerhard’s electronic works. Apart from the electronic component of the Symphony No. 3 ‘Collages’, neither of the publishers of Gerhard’s instrumental music (Boosey & Hawkes and Oxford University Press) hold copies of his electronic works, or his incidental works incorporating electronics. The major repository of Gerhard’s unpublished electronic music is the archive held in the Cambridge University Library. A small number of recordings and cues of theatrical productions are held at the British Sound Archive and the Archive of the Royal Shakespeare Company.

During the 1950s and 1960s, Gerhard amassed a significant magnetic tape collection in his studio. This collection comprises a major repository of historical sound recordings of Gerhard’s own work in which all areas of his compositional activity are represented. Following Gerhard’s death in 1970, Poldi Gerhard continued to play back the recordings, helping to identify their contents with her own annotations and comments. After her own death in February 1994, the studio was dismantled and the tapes were deposited at the Cambridge University Library with the rest of Gerhard’s archive. In 2008 the inventory of the tape collection took place, and later that year, Gerhard’s archive was donated to the Cambridge University Library. This archive is tantalizingly incomplete. Four boxes, containing an undisclosed number of tapes were borrowed by David Drew, a close colleague of Gerhard’s, in 1990 from Dr. Rosemary Summers, the executor of the Gerhard estate. At present their whereabouts and contents are unknown. Additional tapes surfaced in 2017 after Hilary Tann donated a chest of materials pertaining to Gerhard to Rachel Mann, including scores, typed analyses (by Tann and Susan Bradshaw) as well as further tapes.

A preliminary assessment of Gerhard’s Tape Archive was compiled by Gregorio Karman in 2007-2008. It provided an overview of the collection, and examined the state of some of the tapes some of which are over sixty years old. In 2012 an Arts and Humanities Research Council Project enabled all of the tapes in the Cambridge University Library archive to be digitized and a complete catalogue of the archive was produced. During this stage, the annotations on boxes and other materials found on the tape containers were documented and the general state of the collection was assessed. Different issues and problems with playing the tapes were identified including on-going chemical and other degradation processes. In addition, a number of tapes were found to be incorrectly labeled or misplaced, as well as many boxes being empty.

For Gerhard’s electronic works, the magnetic tape collection at the Cambridge University Library therefore remains the primary source. Over half of the tapes in the collection are directly related to Gerhard’s sound compositions – the rest comprising a considerable number of recordings of his own instrumental works and a library of music by his contemporaries (including Schoenberg, Webern, Berg, Bartok, Stockhausen and Nono). The tape archive contains 610 entries. This includes individual tapes in boxes, multiple tapes in boxes (such as the individual cues for Symphony No. 3 ‘Collages’), as well as some empty tape containers. The tapes pertaining to Gerhard’s electronic music contain all different stages of his production methods, from initial source recordings to what the composer termed ‘multilevel compound mixes’, and completed compositions. This in itself offers a unique perspective on Gerhard’s working methods and is distinctly different with regard to his instrumental works for which he left very few sketches, preferring to destroy them and leave only the fair copy of the autograph score. 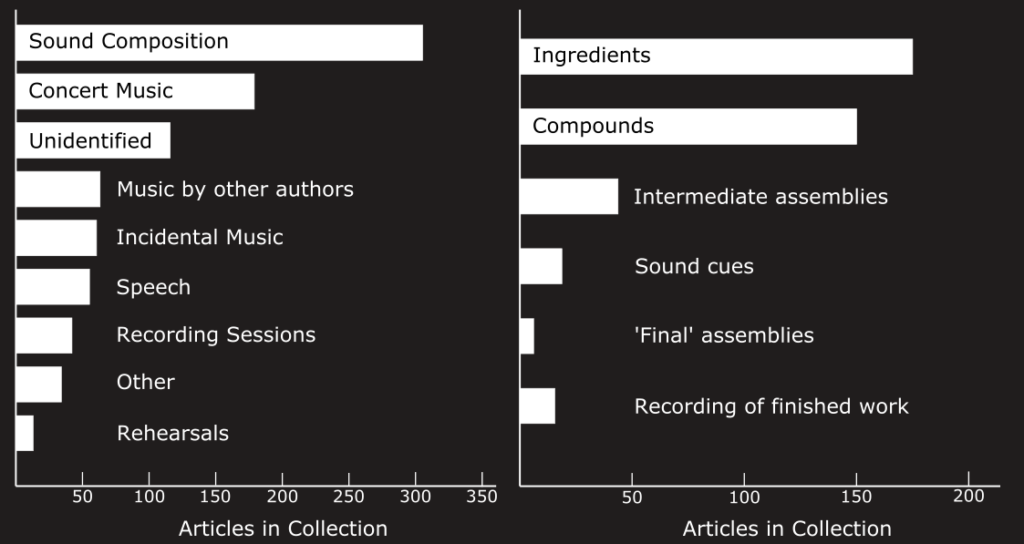