Across the GLAM (Galleries, Libraries, Archives and Museums) sector, there was a rush of calls in March and April asking for participants for mass observation-style projects, aiming to capture the everyday experiences of COVID-19. Subsequently, there has been a series of projects looking to document the Black Lives Matter 2020 protests. There’s a lot going on this year, and GLAM people want to make sure it’s documented for future researchers.

At Heritage Quay we seriously discussed the idea of doing a COVID project ourselves, asking for submissions from the general public in the form of diaries, audio visual materials etc but decided not to. We realised our efforts were better spent on making sure that our organisation, the University of Huddersfield, is documenting its approach to this unprecedented crisis, but that’s it for now. One of the things that we took into account was the multitude of other projects out there, which I’ve listed below. These were repositories better set up to take in and process the contributions, and were often more relevant for communities. We would just be adding more noise into the mix.

We are considering setting up activities for staff and students at the University to contribute when campus has reopened, which would be more about processing through creative activity or conversation with the option of donating afterwards. For us, this feels like the right approach.

Some recent writing has raised interesting questions about this impulse of cultural institutions to collect in times of crisis and how much they exploit people’s grief (read this link). We’d love to know your thoughts on this.

On balance we don’t consider these projects, which are asking people to share their potential trauma, to be exploitative, if they are done right but we are aware that that can be a tricky line to tread. If you are creating a document of your experience at home, and are thinking of donating it somewhere, check out national and local projects and find the one that feels right to you.

As always, stay safe, and we hope to see you at Heritage Quay soon

Some projects for you to consider:

CoronaDiary at University of Swansea (link)

Community, Covid & You at the Open University (link)

And of course, the 12th May MO project at the University of Sussex did this over one whole day (link)

As part of our series of Heritage Quay at Home activity packs today we’re exploring the theme of Tell it!

This theme is all about creating and sharing stories, which is ideal for any budding curators and writers. Archives are full of stories waiting to be discovered and can also inspire new stories.

If you want to share your stories with us, post them on our social media with #HQatHome and tag us in @Heritage_Quay

Our final theme in our series of Heritage Quay at Home activity packs is Discover it!

This theme is all about sharpening those research skills and playing detective.

Why not have a go at making a historic map featuring your home or school? Download our how-to guide to find out what to do

Something else you can do at home is look out for the pests that can damage archive collections.

Download this sheet first, then the ones below to create your activity pack

Making up the Pest Chart instructionsDownload

We also have a range of educational packs with videos, which you can find at the mylearning.org website.

These activities are simple and straightforward to do, since we’ve all got pens and pencils lying around the house, but still offer a chance for kids to get their creative juices flowing. Click on the images to download.

Rugby League colouring sheets. Parents can have a go at this one too as a bit of colouring in is a good stress-buster. These colouring sheets are inspired by our Rugby Football League collection – stick to the colours of your favourite team or if you fancy having a go at fashion design, think outside the box (or the lines).

Make a Victorian-style newspaper advert for a weird and wonderful invention to solve a modern-day problem.

As part of our series of Heritage Quay at Home activity packs today we’re looking at the theme of Build it!

These hands-on projects show you how to design and create your own buildings from materials that you probably already have at home.

These activities were originally inspired by an exhibition at Heritage Quay about local buildings but are just as relevant now. Click on the images to download the instructions.

Take a picture of your finished architectural masterpieces and share it with us on social media using #HQatHome and tag us in @Heritage_Quay.

Home schooling and teaching remotely under lockdown can be a challenge – as can keeping the kids entertained. So at Heritage Quay, we’re offering a free package of fun (but educational) activities for children to do at home or at school, as part of our Heritage Quay at Home initiative.

We’re uploading a series of worksheets that children can do either on their own or with parents. The activities are inspired by our collections, and influenced by successful workshops and outreach projects previously held at Heritage Quay in partnership with schools. You might want to use them to supplement your lessons, or just for a bit of a change!

Some of these worksheets are targeted at specific key stages and cover a range of subjects, including English and History. They include creative writing challenges and building projects that give children the chance to be architects (with Lego and cardboard rather than bricks and mortar, that is!).

The activities are grouped under four themes and you can find out more and download the resources by clicking the links below.

Sometimes when we catalogue a collection, an interesting story appears as a tangent. The life of Arthur Arathoon Paul is one of those stories.

We’ve recently been working on the Society for the Promotion of New Music archive. Amongst the papers was a box of creative writing from someone called “Arthur Arathoon Paul”. His unusual middle name was intriguing, particularly as a quick search seemed to suggest that he wasn’t a professional musician, or composer. As I love a historical puzzle, I decided to look a bit deeper.

Helpfully, a colleague had come across some more clues – it seemed that Arthur had left the SPNM around £100,000 in his will (about £1.7 million today) in 1967. And there seemed to be a connection to a G. Paul who was involved in music in some way. Thus armed, I took to the internet. A quick websearch suggested that that unusual name, ‘Arathoon’ was Armenian in origin. Thanks to a well known genealogy website, I found an Arthur in several British records and followed the breadcrumbs. This is his story…

Who was Arthur Paul?

He was born in 1896 in Singapore, in the Straits Settlement (part of the British Empire) to Thaddeus Paul and Mary Pauline Arathoon. Arthur’s parents were both from important Armenian families in Singapore, a small number of whom (including the Paul, Arathoon, Sarkies and Stephens families) had built properties including hotels, churches and were merchants and traders.

Check out this great article all about them.

It’s worth noting that these “Armenians” were actually from the city of Isfahan, which is in modern-day Iran.

The first we see of Arthur in British documents is the 1901 Census. He appears to be staying with his mother and older sister Mary Sophia in Dulwich, London (helpfully for us), with the Stephens family.

By 1911 the Pauls (now with younger son Gerald but not Thaddeus) were living permanently in Hampstead, London, with a small staff of servants. They lived alongside merchants and stockbrokers, and the odd celebrity.

Arthur next appears in 1915 when he joined the 28th London Battalion (the ‘Artists Rifles’). Incidentally, their headquarters in London is now a venue called The Place which hosted SPNM concerts.

He enlisted on the 11/12/15, went to France on 5/3/16 and was sent home 6/7/16 then was then discharged in September 1916! So he had a pretty short war. The reason for discharge was “being no longer fit physically for war service”. Considering that the 1/28 Rifles were running an Officer Training Corps base at the time, it looks like he was injured in a training accident. From the dates in his creative writing books, Arthur spent the rest of the war staying at Selma and East Cliff Manisions in Bournemouth writing jocular romantic short stories.

After the war Arthur became an independent gentleman. When asked to give a profession, he used ‘merchant’ (perhaps when helping with the family business) and ‘author’. A selection of his poems was published in 1929 but the rest seem to be unpublished. He also had a go at writing music in the 1940s and we have his manuscript book with this work.

Arthur never married and died without a direct heir (more on that below).

So what about his family? His elder sister Mary married a Mr Galistan/Galestan (another prominent family from Singapore).

Gerald, his younger brother, was born c. 1904. Gerald trained as a barrister following education at Pembroke College. He worked for a firm called Escombe, Mcgrath and Co before quitting to run the family business on the death of his father Thaddeus. In his spare time Gerald was a songwriter.

In the 1920s he collaborated with Billy Mayerl on the compostion of songs like, ‘Love’s Lottery’ ‘Did Tosti Raise His Bowler Hat (When He Said Goodbye)’, I Loved, I Lost‘, ‘Lullaby Baby’ and Georgie Porgie which was a big hit. He was credited as the lyricist Gee Paul. He also wrote the song Never Again on his own.

In 1938 a song he had written was personally selected by Gracie Fields for inclusion in her new film Keep Smiling. Unfortunately Gerald didn’t live to see the premiere.

Mary Sophia (already a widow) died in 1930, leaving a small fortune to her father Thaddeus. He then passed away, in London, the following year. Most tragically, Gerald died of heart disease, still in his 30s, just before Christmas 1938, leaving a small part of his own fortune to a charity helping poor or sick musicians. He died shortly before the premiere of Keep Smiling, and so never got to see his song on the big screen. Finally, Arthur’s mother Mary died in 1942. Arthur was the only one left.

However, one last breadcrumb from the archive shows that he still had some family in Britain.

We still haven’t completely solved the mystery of why Arthur left a fortune to the SPNM, but they were very glad he did. Following years of financial insecurity, the money allowed them stability at a crucial time and contributed to the future careers of composers such as Peter Maxwell Davies. If you know anything about this fascinating family please get in touch! 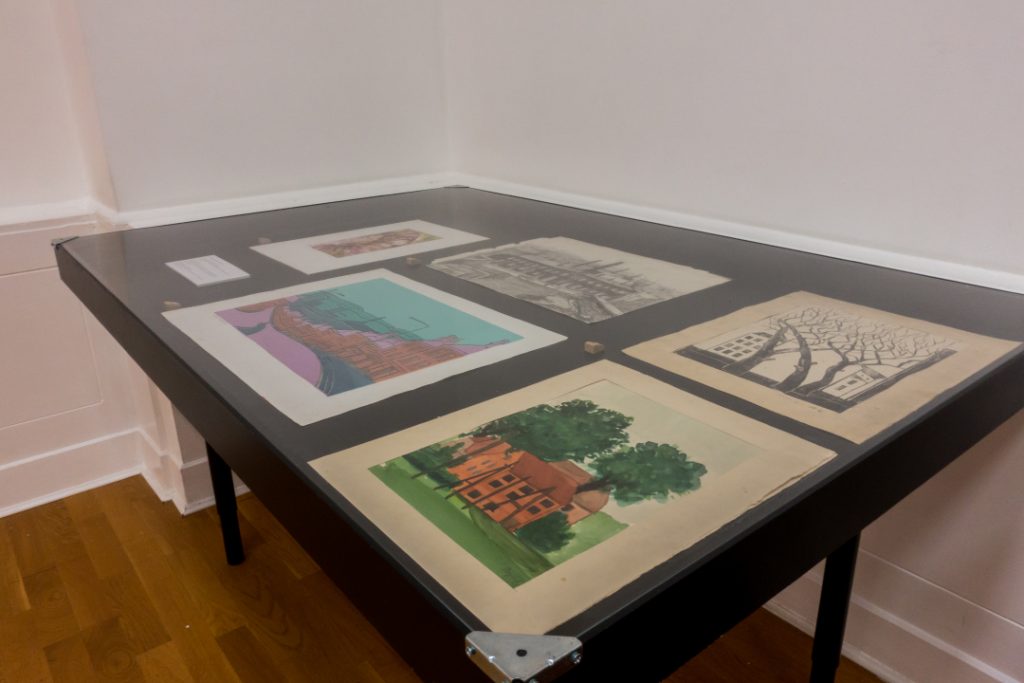 The centrepiece of the exhibition is a new work created by HOOT Creative Arts which was inspired by items from the Sally Jerome Archive, which is kept by Heritage Quay. Supported by the ROTOR team from the School of Art, Design and Architecture, participants from HOOT visited Heritage Quay to explore Sally’s portfolios, before making their own work using similar themes and techniques.

On show from Heritage Quays’ collections are some of the artworks that HOOT found most inspirational and archival documents which tell the story of Sally’s life.

The exhibition is on until 3 November. The Sally Jerome archive is available for all to view at Heritage Quay. 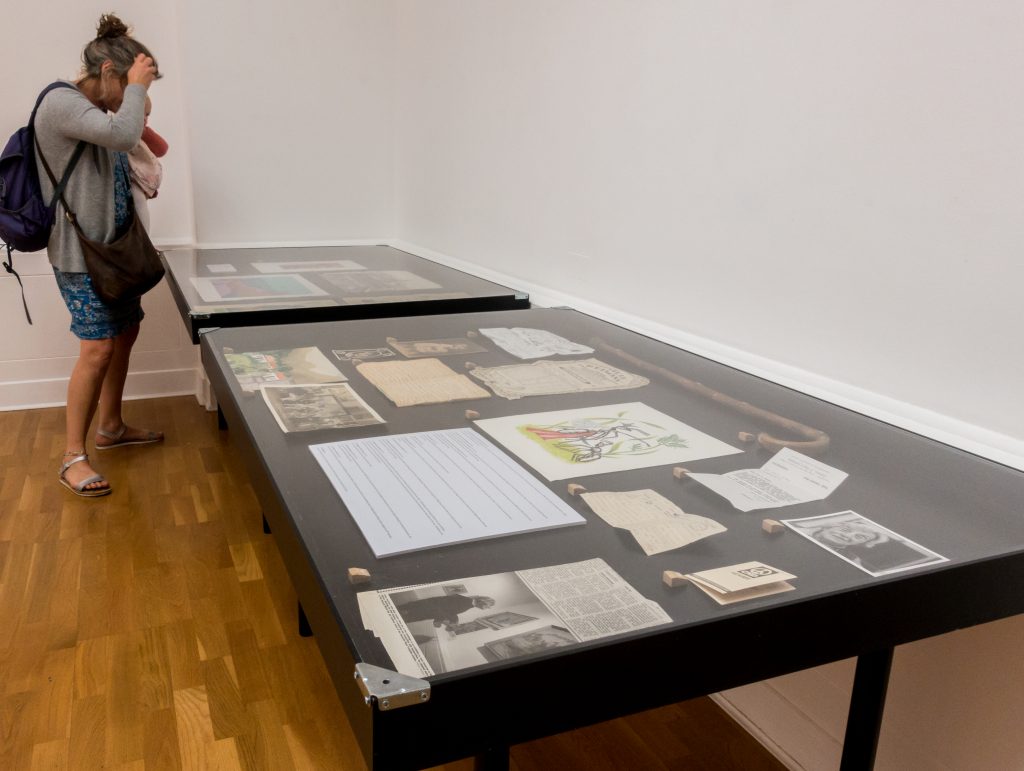