This week we’ll see the Tour de France come to Huddersfield – but in November 1936 Huddersfield Rugby League Club went on their own ‘Tour in France’! 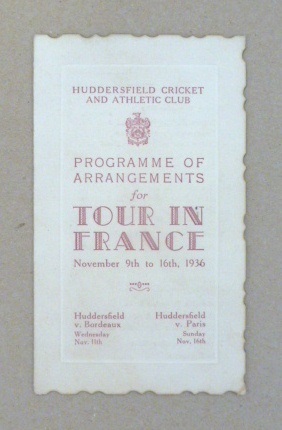 The Huddersfield Rugby Football League Club (then known as Huddersfield Cricket and Athletic Club) was one of several teams that went across the Channel in the 1930s to help establish and build support for rugby league in France.

This programme of events shows the Huddersfield team played two matches on their 1936 trip; one versus Paris, and one versus Bordeaux. According to newspaper reports the Bordeaux match took place in bitterly cold and wet weather but, despite only being the second season of rugby league in France, still managed to attract 8,000 spectators!