Today is International Archives Day, giving us all a chance to celebrate the rich variety of archives held in collections around the world. Archives can be a wonderful opportunity to reminisce and revisit the past – and if you look closely every letter, document, report and object has a story to tell.

Working on the Rugby League Archive today we found this rugby ball. 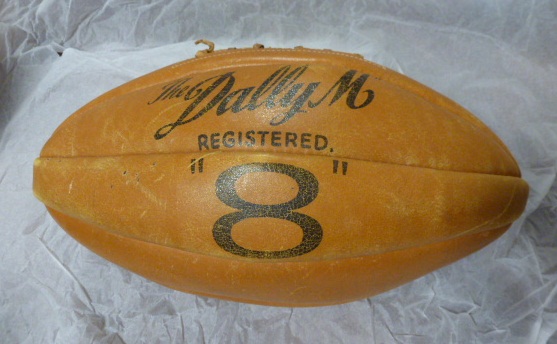 From the leather stitched style of the ball we could guess (most objects aren’t labelled with date and background information, so accompanying documents are vitally important) that it was quite old (today’s balls are synthetic); but then a bit of further research found that in fact this ball embodies a tale of stoic heroism, and victory in the face of unfavourable odds…

In 1958 the Great Britain rugby league team toured Australia for a series of test matches, they were defeated in the first test but went on to complete the tour undefeated – but this was not a foregone conclusion. In the second test against a strong Brisbane team Great Britain was down to eight fit players on the pitch (substitutions weren’t allowed in rugby league until 1964) including injury in the fourth minute of play to the captain, Alan Prescott, who broke his arm. Undeterred, Prescott played on for the remaining 77 minutes, leading the team to a 25-18 victory! The match has justly gone down in history as ‘Prescott’s Match’.