This was not a big seller and a good clean copy has only recently been added to the Heritage Quay British Dance Band Collection.   It is Eric Coates’s delightful “By The Tamarisk” played by Jack Hylton’s Orchestra.
Hylton’s Orchestra was a major stage attraction by 1926 and exploring material well beyond the normal expectations of a dance band. Coates was enjoying the success of his Three Bears Suite and Selfish Giant at the time Hylton added “By The Tamarisk” to their repertoire

Amongst the 12,000 “pre-vinyl” 78s in our British Dance Band Collection are examples of around 200 different record labels.   One particularly rare and sought-after brand can be seen here at the start of this video. It is the very short-lived “Gold” Edison Bell label which was only in existence for about 18 months in 1933-4.  The rest of the video features still photographs of the Joe’ Loss band.   Joe led one of the best British bands of the 1930s and he was still active as a bandleader until his death in 1990.

Here’s another recent addition to the British Dance Band collection here in the Heritage Quay.   It represents exactly what was happening in popular music at the end of the Ragtime era before the arrival of jazz.    The band was based at Lyons’ Corner House, Coventry Street, London with an instrumentation based on a lead violin, two banjos, piano and drums.   Recorded in March 1918 and issued on the Winner record label that had adopted a rather dull colour during the austerity of WW1.  Jazz “proper” arrived exactly 100 years ago by boat with the visit of the Original Dixieland Jazz Band.   Next month we will be celebrating this by sharing their first London recording which was in April 1919″

Here’s one of the latest additions to the British Dance Band Collection held here at Heritage Quay.   It is an exceptionally rare example of a World Record from the early 1920s.   Unlike most of the collection wherethe records revolve at 78 r.p.m, World Records experimented with a system where the record starts slowly and gradually accelerates towards the record label.

The theory was to reduce the deterioration of sound quality towards the centre of disc recordings where each rotation is shorter.  For various reasons the “World” project was doomed with the eccentric polymath aviator, publisher, Member of Parliament and entrepreneur-inventor Noel Pemberton Billing (1881–1948) swiftly moving on to other things .

However the system of “constant linear speed” was revisited much later with the introduction of CDs that revolve at a much faster speed when the laser gets close to the centre.The new acquisition will be difficult to transfer to an accessible MP3 as the team are still working out a way of using computer software for editing the sound files which will be recorded at a constant speed and then adjusted accordingly.

Last Saturday was a momentous day for us here in Heritage Quay – we welcomed our first participants to a workshop: Composing for non-Composers 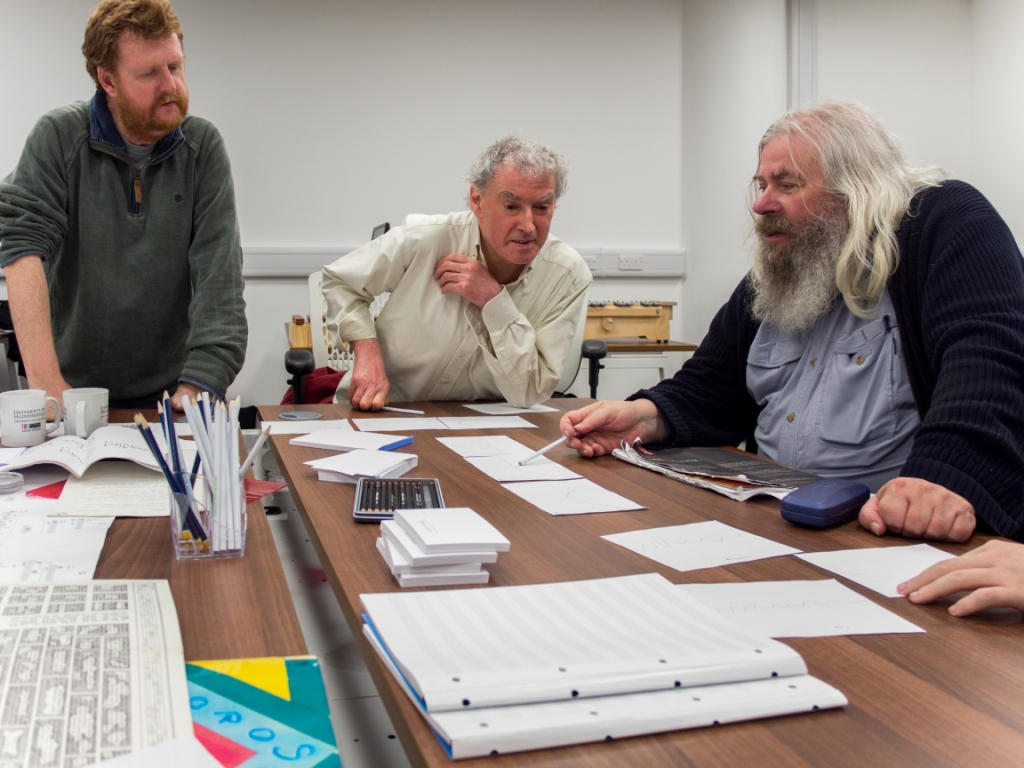 The session was programmed as part of the Huddersfield Contemporary Music Festival. As regular readers may know, Heritage Quay is the home of the hcmf// and British Music Collection archives, two very significant repositories of contemporary classical music. The theme of the workshop, inspired by these collections, was graphical notation. With the help of Duncan Chapman, a professional musician and composer, the group and I explored some scores from the archives and got some practical tips on how to compose (and play) music written in this way. This is how we got on: 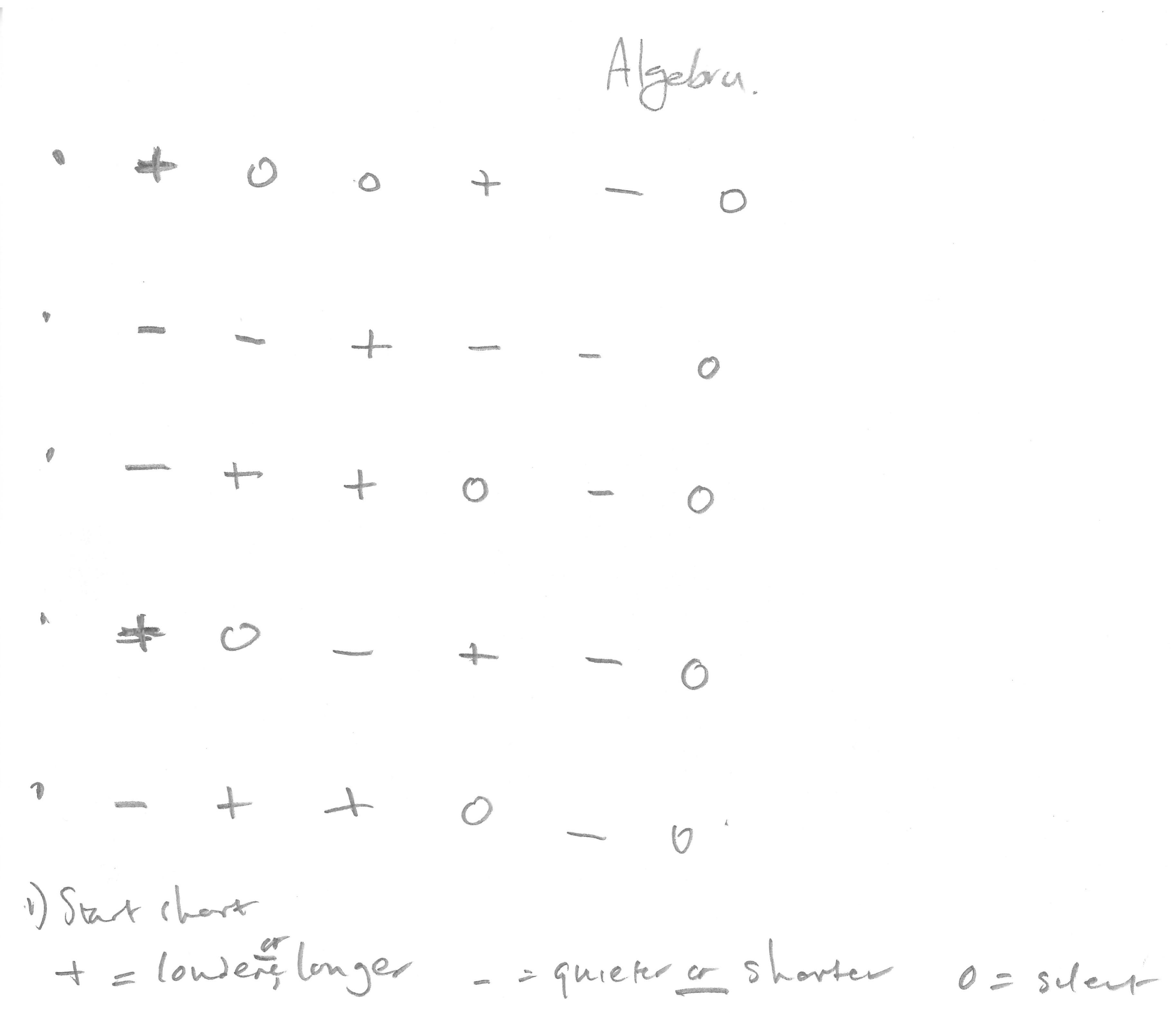 In Search of an Ending 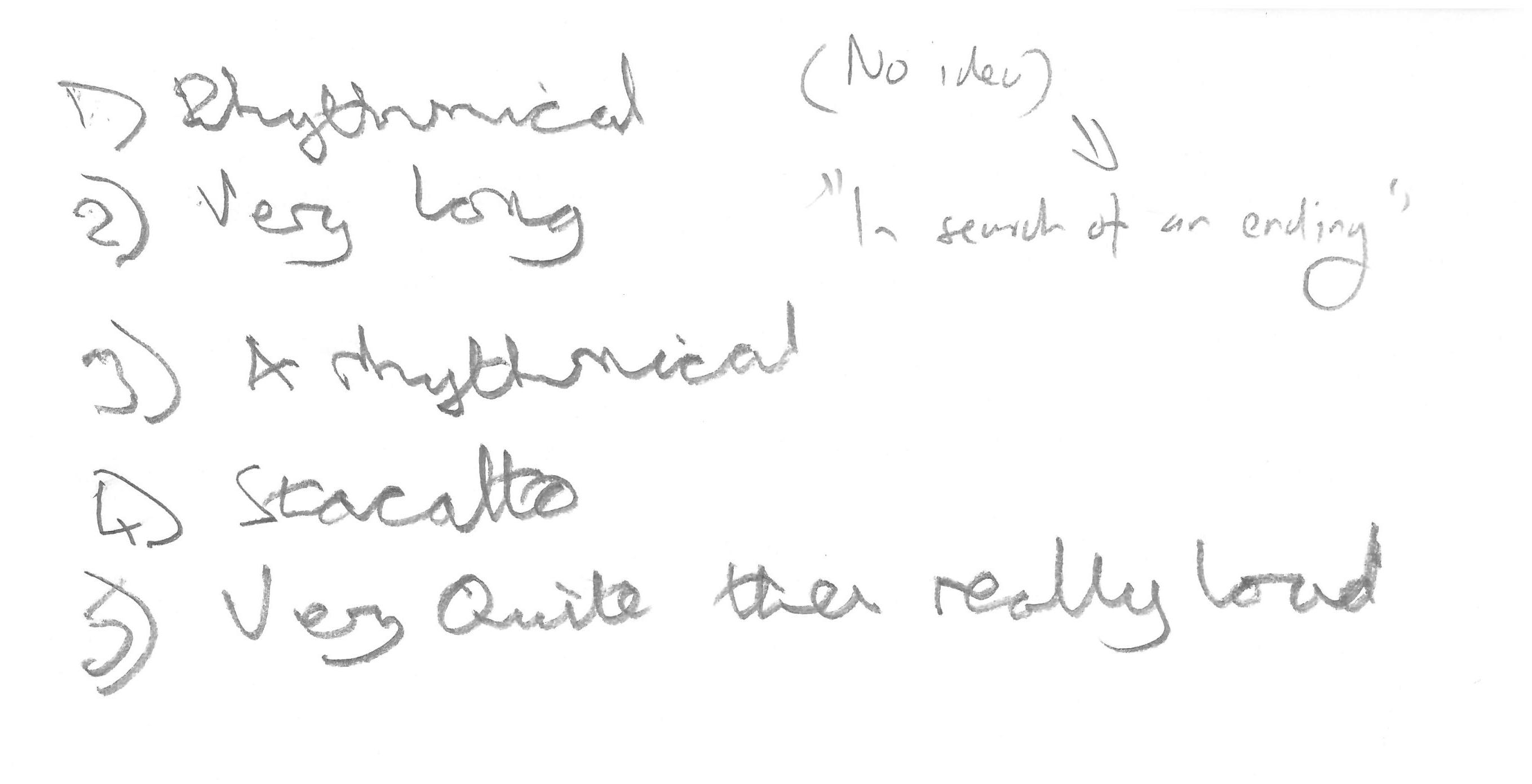 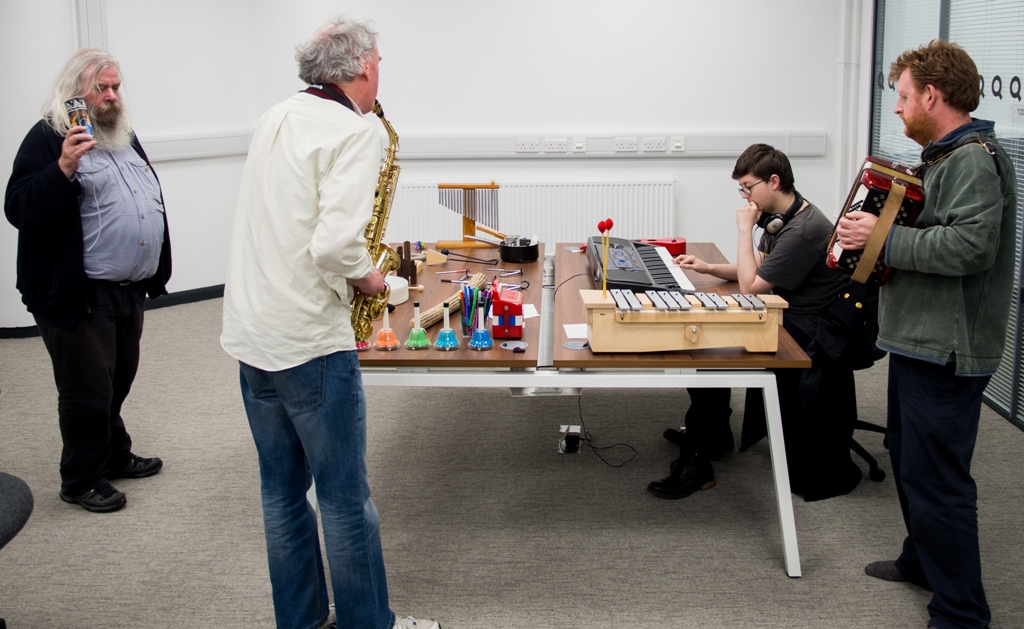 Look out for more workshops at Heritage Quay in the new year. If you don’t want to miss out follow us on Twitter @Heritage_Quay or email archives@hud.ac.uk with the subject line “Newsletter”

There’s been lots of activity since I last posted about how the overall project is progressing – and still more going on behind the scenes getting the final specifications for the building works right, going through the tender process, and so on.

As well as making a lot of progress with our name and branding for the new centre, we’ve also been out to tender for conservation services to repair records that are too damaged to use without intervention, and for digitisation services to help us preserve vulnerable formats like Betamax video and audio cassette tapes, as well as digitising a selection from the collections to make them available off site.

Regular readers will have noticed, however, lots of collections updates on the blog recently – and the most exciting and tangible thing to report is our Collections Access Officers (both HLF and National Cataloguing Grants Programme) are in post and going full steam ahead on uncovering and exposing the collections entrusted to us.  Kelda’s already posted about her work so far on the Rugby League board archive and Rob on the discoveries made so far in the British Music Collection, and they’ll be posting regularly.

For me, these two pictures encapsulate a lot of what our HLF project is all about: making the collections more available, and in better facilities than those available to us at the moment (this is the Library’s seminar room, used for a couple of hours in between teaching so that Kelda & Rob can spread material out to sort it):

Background to the collections

The collections reflect major social, cultural and political movements of national and international significance, which have a common thread in relating to Huddersfield and the region as a key location for associated activity.

A wide range of formats are covered, including files and individual sheets, textile samples in bound volumes, large formats including maps, plans, drawings, posters, magnetic video and audio cassettes, photographic formats of a wide range of types and dates, many of them plastic based (acetate and nitrate), long playing records and digital material both sound and image.

The vast majority of the collections date from the mid-19th century to the modern day, although there are a few items dating back to the 18th century and one or two items even earlier.

The music collections are becoming a remarkable feature of the University’s heritage collections.  The current collections along with the expected accruals will mark the University out as a critical destination for anyone wanting to study British classical or “art” music of the 19th, 20th and 21st centuries in particular. The key collections include the British Music Collection, The Huddersfield Contemporary Music Festival (HCMF) archive and The Goldberg Ensemble archive.

However, the collections also clearly depict the notable local music heritage of this apparently unassuming northern town with the Slaithwaite Brass Band Collection and smaller collections such as that of composer Haydn Wood.   Alongside the HCMF, these collectively portray different aspects of the music that has been created and/or performed (often for the first time) in Huddersfield and the surrounding valleys.

The British Music Collection (BMC) is a wonderful and unique resource for contemporary British music. Its remit is to provide a place of deposit for scores and recordings by UK-based composers.  This resource was originally based in Somerset House, as the British Music Information Centre, and available for public consultation until it was moved out into storage in 2008.  The vast majority of the collection is self-published work and therefore differs from the material held in the British Library which collects published work.  It comprises a large collection of around 39,580 scores dating back to 1855 and 21,436 recordings.  There are recordings from the 1920s onwards; the earliest probably dates from 1925.  However, the vast majority of recordings cover the 1980s to the 2000s.  The BMC has a very wide remit.  ‘It’s the only type of archive that brings together a cross-section of contemporary music including film, choral, brass and modern.’ Since the 1980s the British Music Information Centre amassed a large amount of electroacoustic work but classical form music is also included. The collection is not fully representative of UK contemporary music scores and recordings. But it is coherent and has always had a strong collecting policy to avoid obvious gaps.  Nevertheless the collection has its own idiosyncrasies, as it was open to deposit from any professional composer from the 1940s onwards.  A significant proportion of the content is unique work that cannot be found anywhere else. For example, whenever the Arts Council commissioned work it deposited a recording of the first performance with the British Music Information Centre. There are also many composer files providing contextual information that would not be available in a standard music lending library.

Search the catalogue of the British Music  Collection.

The archive of the Huddersfield Contemporary Music Festival (HCMF) documents this annual festival (started in 1978 by Professor Richard Steinitz of the then Huddersfield Polytechnic).  The Festival remains a vibrant and key international event for the contemporary music community and attracts visitors from all over the world. Many compositions have been premiered at the Contemporary Music Festival and its extensive repertoire covers cutting-edge jazz, orchestral, choral and electroacoustic performances, along with film, dance and music theatre. Guest composers who have taken part in the festival include Karl Heinz Stockhausen, Terry Riley, Brian Eno, John Cage, Will May, Steve Reich, Daniel Giorgetti, Jonathan Harvey, and Sir Harrison Birtwistle. The Festival takes place in a number of venues including the Lawrence Batley Theatre, Huddersfield Town Hall, St Paul’s Hall, St Thomas’s Church and the Creative Arts Building of the University of Huddersfield. Some performances are broadcast on BBC Radio 3.

This major collection is a coherent record of both the live performances and the organisation of the Festival.  It includes a large selection of recordings of performances including many premieres of compositions. There are also written records including correspondence with world famous composers and financial records. Printed records include a complete run of programmes, reviews and publicity material such as posters as well as a few artefacts such as T-shirts.

The Ensemble is a British freelance string ensemble dedicated to promoting string ensemble music. From its creation in 2000 to 2008 the Ensemble commissioned 39 pieces and toured the UK with this music as well as hosting accompanying children’s and student composers’ workshops. The compositions included works by the University of Huddersfield Professor Michael Clarke and a former student of the University, Joe Cutler, who went on to become Head of Composition at Birmingham Conservatoire and a featured composer at the 2005 and 2010 Huddersfield Contemporary Music Festivals.  The collection held by the University comprises 19 original scores of pieces commissioned by the Goldberg Ensemble from the British composers with notations by Malcolm Layfield (Artistic Director for the Goldberg and Head of the School of Strings for the Royal Northern College of Music) for the world premiere performances.  There are also details of the 8 ‘celebration’ tours plus correspondence and 2 CDs recorded by the Ensemble.  It is a collection that strongly complements the HCMF and BMC collections, continuing the theme of original composition of contemporary music.

Slaithwaite Band is a thriving exemplar of the brass bands that sprang up across the industrialised north of England in the C19th and early C20th, taking their members from the mills and mines and often centred on a specific industrial concern.  Slaithwaite was formed in 1892 and 120 years on is still one of the finest brass bands in the UK.  The core of this coherent collection is its scores, including hand-written arrangements of orchestral music for brass, often used for the hotly contested competitions that have always been such an important part of the ‘banding’ world.  There are even hand-written arrangements by composer Haydn Wood (whose papers are also in the University Archive). But it also holds other material such as uniforms, tickets and music stands with cigarette stands!  Many bands folded in the 1980s and few found a home for their collections.  The Slaithwaite Band Collection provides a potted history of banding.  It is a rare survival of a musical heritage, much of which was lost with the de-industrialisation of the UK.

Smaller collections that support the music theme include:

To find out more about any of our collections, please contact us.